The idea for Curse Under The Moon popped into my head way back in middle school. I was still young so the idea was developed through the mindset of a young girl. We’re talking high school romance, one true love, happiness, and all the positives I wanted in my own life. I started building my characters right away and even drew up a cute picture I thought would be a good representation of the main couple featured in my novel. 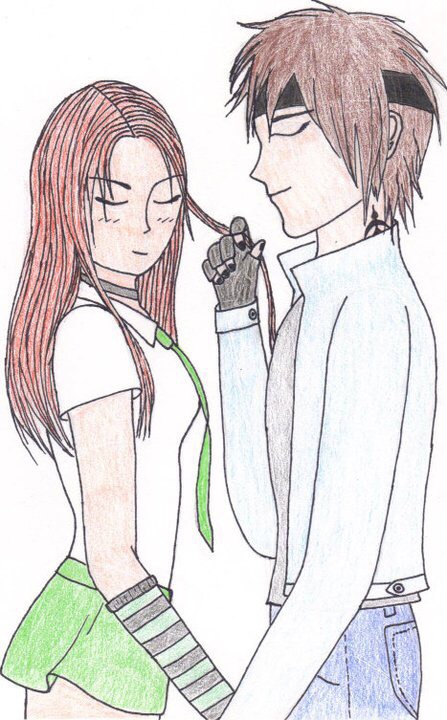 Okay, the image is cute and its points out some key factors I was going to feature in their story. I’ll give you the inside scoop on my mindset when I created these characters.

Sally Newton – A female witch with an ugly birthmark on her arm which she tried to keep hidden from view. She was a shy teen unable to stand being around a lot of people. Especially if said people were male. / I kind of built her character around myself because deep down I wanted to pretend I could have a fun, magical story and I wanted her personality to be similar to mine all while taking on the traits I wished I carried. Trying to make her real became very difficult since I couldn’t settle on key facts.

Fenris Morgan – He was created to be an attractive, edgy teen. Fenris was liked by a lot of people and seemed like a cool dude. The tattoo on his neck was frowned on by the teachers but he did his best to keep it out of view so people weren’t too distracted by it. / This guy was a complete combination of the boys I thought were cute in my school as well as some famous faces. His personality changed almost every time I tried to write and that made it very difficult to push the story forward.

I made my best attempts to bring this lovely couple to life. But when I tried to write their story I would only end up erasing it creating the need to start again. It never worked and soon I let the storyline fade to the back of my mind.

Many years later, my desire to write the novel was brought back to life. With the experiences I took on through the years after the creation of my original idea I was able to build my characters up to be much stronger. I ripped them away from the simple life as a high school student and threw them into the real world. Sally became even more independant while Fenris finally took on a solid personality. My characters changed in the best way possible. They became a solid vision.

What lesson should you take from my little battle?

Taking the time to step back and look at your characters is a good way to get your story started. You should make sure they have a solid personality. That way you can answer any question about them with little difficulty. Take time to think through some of the key points you want to make in your novel. If you can’t think of the proper way your characters would react then adjust the story or adjust their personality.

It’s okay to change your characters as much as you need but once you start the story you should have a solid build. You want readers to believe in your characters. Those characters need to pull us in so the book becomes locked to our hands. We want to know why Sally is so standoffish and we want to know why Fenris is suddenly attracted to her. Make all those points clear or provide your readers with enough hints to make them want to learn what’s going on. Your characters are key pieces needed to make your story enjoyable.

What do you think about when you’re creating characters? Tell me in the comments!

My #littlehelper is at it again!
Check out your #localgameshops to jump on this sale!!
Gotta love the days when your #art looks great! Next chapter in the works for #CupidsCat and I’m #pumped!!
My @smalltowndicks fuzzy socks arrived today!! No idea when I’ll get to wear them next since it’s #summer in #Oklahoma. Luckily, my feet are always cold? 😂 Yay #fuzzysocks!!
https://www.etsy.com/shop/ArtWithArrow
Next Chapter of Cupid's Cat is live and ready for your eyes! Read the latest chapter or start from the beginning with the links below.